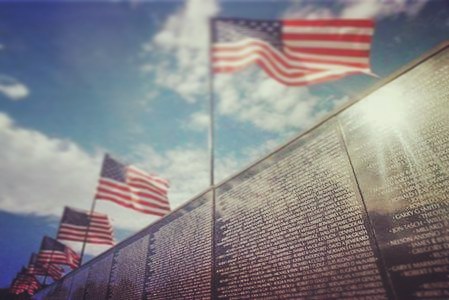 Last month we helped build the platform for the Vietnam Veterans Memorial Moving Wall. Here is a little history behind the Moving Wall.

“The Moving Wall” is the half-size replica of the Washington, DC Vietnam Veterans Memorial and has been touring the country for thirty plus years. When John Devitt attended the 1982 dedication in Washington, he felt the positive power of “The Wall.” He vowed to share that experience with those who did not have the opportunity to go to Washington.

John, Norris Shears, Gerry Haver, and other Vietnam veteran volunteers built The Moving Wall. It went on display for the first time in Tyler, Texas in October of 1984. Two structures of The Moving Wall now travel the USA from April through November, spending about a week at each site.

A Sponsor is any organization or group of individuals that wants The Moving Wall to visit their area and is willing to do the work to make the local arrangements as described in “Scheduling a Visit of The Moving Wall.” Sponsors are frequently civic groups, schools, or veterans’ organizations (by Michael Gill). Sponsoring normally requires months of planning by dozens of local volunteers.